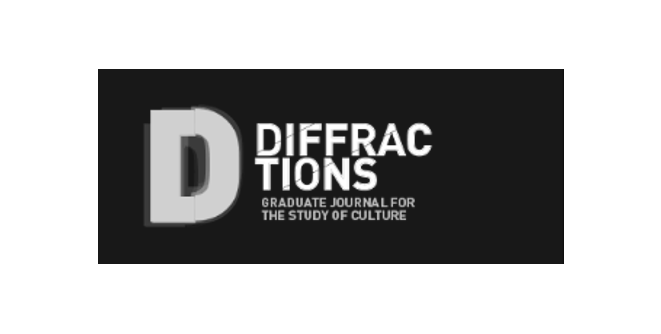 Diffractions
Is an online, peer reviewed and open access graduate journal for the study of culture. The journal is published bi-annually under the editorial direction of graduate students in the doctoral program in Culture Studies of the Lisbon Consortium, at Universidade Católica Portuguesa.
ISSN: 2183-2188

Intersecting perspectives from urban studies, cultural theory, and narrative, Diffractions’ next issue connects architectural thought with a contemporary take on built environment as a net of infrastructures, interfaces, and lived experiences. We pursue an interdisciplinary reflection on a hybrid territory, where buildings and discourses, practices, and ideas, urban texts, and literature are retraced in order to stimulate a deeper awareness of cultural spaces and their narratives. We invite graduate students to contribute with papers that address a territory defined by the construction of social spaces (Lefebvre) and its critical notions of interface (Nawratek), infrastructure in culture (Butler), readability and the experience of urban spaces (Certeau), as well as the city as discourse (Barthes), and the role and influence of spatial singularity by the intersection of all of the elements above (Massey). Research related to the understanding of the urban sensescape of today, to the rhetoric of space and its narrations, as well as spatial politics and policies in the city, are welcome. In this way, we aim at fostering a cross-disciplinary debate, so that many and diverse aspects of the contemporary urban experience may be critically, productively, and even poetically articulated.

Space needs to be occupied in order to be recognized. Its structures also create their own maps and territories and it is from that point on that they are given their symbolic meanings, thus creating their social function, as noted by Lefebvre (1974): “(S)pace serves an intermediary or mediating role […]. This tends to turn social space into a transparent medium occupied solely by light, by ‘presences’ and influences.”

Regarding the legitimate demand for social well-being in public space, Krzysztof Nawratek (2012) writes: “Most of the emerging so-called public spaces keep their users in a limbo of indeterminacy. These spaces do not allow for intimacy and neither do they invite interaction.”

As suggested by Judith Butler (2014), public assembly and political action both contribute and depend on material conditions, in as much as “it seems that the space of appearance is not ever fully separable from questions of infrastructure and architecture”. However, this idea might need to be extended to virtual spaces and their architectures in which social interactions occur and virtual bodies occupy a given space, with full intentions and consequences.

The relations between material spaces and their users are also mediated by the narratives that express the way they are experienced; whether they are collective or individual, they allow spaces to be created and performed by those who walk in/into them, “whose bodies follow the thicks and thins of an urban ’text’ they write without being able to read it.” (Certeau, 1984) Moreover, a well-designed built environment may become a carrier of stories and information.

Every aforementioned element will, then, when coming together, form the space whether solid, virtual, or conceptual, as a socially created discourse that will provide it with its own personality and singularity as Massey has stated: “What gives a place its specificity is not some long internalized story but the fact that it is constructed out of a particular constellation of social relations, meeting and weaving together at a particular locus.”

We invite participants to address the following or other relevant topics:

Abstracts will be received and reviewed by the Diffractions editorial board at info.diffractions@gmail.com, who will decide on the pertinence of proposals for the upcoming issue. After submission, we will get in touch with the authors of accepted abstracts in order to invite them to deliver a full paper. However, this does not imply that these papers will be automatically published; rather they will go through a peer-review process that will determine whether papers are publishable with minor or major changes, or they do not fulfill the criteria for publication.

We are also glad to announce that we will have a special section in our journal entitled ‘What are you Working on Now?’ In this section, we accept submissions related to your current research interests or work in progress. Your submissions do not have to address the main theme of this issue. All research areas of the humanities are welcome. Please submit your proposals for this section under the subject “What are you Working on Now? –Abstract Title”.

We look forward to receiving abstracts of 150 to 200 words, and 5-8 Keywords by June 10th, 2020 to be sent to info.diffractions@gmail.com with the subject “Diffractions 3” and your Abstract’s title.